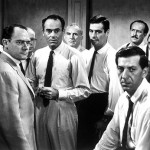 The Netherlands are the only Western Constitutional State without any participation of non-expert laymen in trials. The film Twelve Angry Men (Sydney Lumet, 1957) shows that the slow justice of a jury trial is a way to combat tunnel vision. Are the Dutch smarter than the people in foreign states? Or should The Netherlands introduce it? In this introduction for students of the Roosevelt Academy and other visitors of the Film by the Sea Festival I ask for an unanimous verdict.

Thank you for coming to the movie that has been chosen the best law film ever made. The film is 55 years old now and based upon the television drama written by Reginald Rose in 1955. The year I was born by the way.

Television and filmwriter Rose is said to be inspired by his own service at a jury trial.

And Rose’s drama inspired the American director Sydney Lumet to make the film you will be seeing right away.

I never saw the film until recently. But I did read the play based on Rose’s drama.

Who am I? I am a freelance legal journalist. In 2007  I wrote a book on the pros and cons of jury trials, called Dames en Heren van de Jury, Ladies and Gentlemen of the Jury.

Conclusion: perhaps The Netherlands should introduce jury trials in cases of alleged murder. Why? Because this kind of slow and thorough justice reduces the risk of tunnel vision and miscarriages of justice.

Twelve Angry Men is about a jury of twelve white men between 35 and 75 years old. They have to decide whether an 18 year old boy is guilty of murdering his father. That is not an easy decision to make.

First degree means that the suspect had the purpose of killing the victim and also planned the killing.

So one of the people next to you is the suspect of homicide. The other eleven are the members of the jury you have to decide with whether the suspect is guilty or not.

If the suspect is found guilty the electric chair is waiting. So the judge says in the beginning of the film: ‘You only vote guilty when you are convinced beyond reasonable doubt. There’s a life at stake. You will face a great responsibility.’

Usually if the jury finds the defendant guilty the judge decides what the punishment will be. But in capital punishment cases like this the jury actually decides about life and death.

That may seem a scary thing to do. But you have plenty of information. The last six days you’ve heard the Prosecution, the Defence, the testimonies of the witnesses and the experts. You’ve seen the murder weapon, a ground plan of the building where the murder took place and other pieces of evidence.

Now, deciding for your self is complicated enough. But what do the others think?

You cannot just count the votes and look at the outcome. The verdict has to be unanimous. Or, as the foreman of the jury says: ‘The decision has to be twelve to zero, either way.’

So once you’ve decided for your self, you have to convince the jury members with a different view. Or, if you’re not convinced beyond reasonable doubt, you have to sow doubt with the other jurors.

If the votes are not twelve to zero or zero to twelve there’s a hung jury. And a hung jury means: a new trial with another jury.

An unanimous verdict is the classic assignment for a jury. But unanimity is not obliged in all states of the USA; in some states a majority can be sufficient.

In the Belgian and French Assize trial system a majority will do on most of the questions asked of the jury. But the decision on the premeditation of the crime – is it murder in the first degree, the second degree or just manslaughter – should be taken by a qualified majority. If the majority is just seven to five

When agreement amongst all twelve is not required that will take a lot of pressure off the debate. And it will take less time to reach a verdict too. But the decision will be less profound, less thorough.

The film is from 1957. Does it still go like this today? In many ways: yes! The biggest change since 1957  however is the diversity of the jury.

Today you can buy the play Twelve Angry Women at amazon.com. And three years ago The New Dawn Theatre Company in Duluth played Twelve Angry Jurors: the cast of jurors consisted of eight men and four women. So there is definitely no sexual discrimination anymore.

Racial monorities still are underrepresented though these days. That is mainly because their command of the American language often is not too well. And because they are more likely to have a criminal record. But a jury of twelve white men is unthinkable today.

I must add to this that jury trials are more rare in the US now than they were back then. Less than nine out of ten criminal cases is tried before a jury. Almost every suspect pleads guilty to a less serious crime. Which means there is no trial at all. You can also find this so-called plea bargaining in murder cases.

If you commit a murder eightteen kilometres south from Flushing you will get an Assize trial in Ghent. But make it seventeen and you will be tried by professionals in Middelburg. As it happens The Netherlands are the only Western constitutional state without jury trials.

Sometimes populist politicians propagate jury or laymen trials. But the majority of the Dutch put their trust in professional judges.

Are the Dutch smarter than the nations with jury trials?

I will not answer that question. I will restrict myself to  just a few pros and cons of jury trials.

One advantage of laymen participation in jury trials is the democratic legitimacy. Laymen give a certain legitimacy to the independent and not democratically elected judicial power.

But all the same jury systems are in debate almost everywhere in the world. That is because a jury trial takes a lot of time and cases are getting more complex. But no politician dares to abandon jury trials.

Another pro is that before a jury the evidence is widely presented, exposed and discussed from different angles. That reduces the risk of tunnel vision. Professional judges sometimes are subject to tunnel vision because they rely too much on police information. Several miscarriages of justice in The Netherlands demonstrate that.

We do not know what jurors do with all the information inside the jury room. What we do know is that, according to several studies, lay people don’t make more mistakes than professional judges when they have the same information the judge has.

But jury’s can be wrong too. The verdict is sometimes unpredictable because of group think. As you will see in the film: the pressure beared upon the dissenting juror can be huge.

One of the jury members starts screaming right away. ‘We’ve got to send him to the chair!’

Then the foreman suggests to cast preliminary votes. ‘Yeah, let’s vote and get out of here.’

Eleven members vote guilty, but one of them not guilty. That man is Davis, an architect played by Henry Fonda, the father of Jane. All the jurors look at Davis:

‘Do you think he’s innocent?’

‘I don’t know. He’s 18 years old. It’s not easy to send a boy to the chair without talking about it.’

As Davis’ doubts grow, as well as the animosity of the other jurors, Davis suggests a secret voting round of the other eleven members. If all vote guilty they’ll go back to the judge with a verdict. If there’s another not guilty vote they will continue to debate.

I want to highlight one argument against jury trials. Jury’s are not supposed to give a reasoning for their decision. They just say guilty or not guilty, yes or no. A juror does not have to justify him or herself. Therefor we don’t know what evidence and which arguments convinced the jury.

This can be very frustrating, especially when the verdict is a big surprise.

It can be frustrating for the jury too. D. Graham Burnett, now professor of history at the Princeton University, wrote a fascinating book from the inside of the jury room, called A Trial by Jury. Burnett was a foreman of a jury in a murder case in the year 2000. He wrote the jury really missed the opportunity to explain the verdict. That verdict was a not-guilty, so it was in favour of the defandant who acted in self-defence. But the jury also wanted to do justice to the relatives of the deceased victim. So they added a small declaration to their verdict in which they stated that the strict application of the law on the proven facts did not lead to a true and right judgment.

The insight in the jury room in Burnett’s book is real. That in the film is fiction. The film is very impressive though. Mainly because it shows exactly what beyond reasonable doubt means.

Just one more thing before we start watching. I wonder how many of you are opposed to jury trials. Would you allow me to take votes now and see if the opinion has been changed after seeing the film? I will only let you go until we have reached a unanimous verdict!