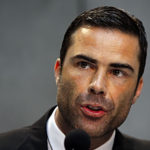 Although the first money launderer still has to be convicted and the first frozen funds still must be confiscated, legislation and supervision in the fight against money laundering and terrorist financing are okay in the Vatican State and Holy See. “We follow a step by step approach,” says President René Brülhart of the Financial Information Authority (AIF).


When banker Roberto Calvi was found hanging on a rope under the London Blackfriars’ Bridge in 1982 with stones in his pockets, public interest in the Vatican’s ties to the mafia increased. Calvi was head of the Banco Ambrosiano, a bank in which both the Vatican and the mafia had a lot of money involved. If the bank goes bankrupt – because $ 1.3 billion has disappeared – the Vatican pays a compensation of 250 million dollars to victims. The mafia is suspected to have killed Calvi because of the loss of money.

In the aftermath of the bankruptcy, Paul Marcinkus, the responsible cardinal, is prosecuted, but not punished. As a Vatican cardinal he enjoys criminal immunity.

When we speak to René Brülhart, just before a seminar in Brussels, he says that looking back is “not very useful”. But to understand where the AIF comes from and stands right now we do look back for a moment, without Brülhart.

In 1942, Pope Pius XII introduced the Istitute per le Opere Religione (IOR) to better manage the income from donations, indulgences and (in) movable property. Bankers do the work under the supervision of cardinals. The Vatican City is a sovereign state and the institute does not have to submit to the supervision and restrictions for Western banks. Journalist Gerald Posner describes in God’s Bankers how the IOR quickly becomes the perfect place to store stolen spoils of war and other bad money for lack of supervision.

Even after the Second World War, the IOR remains an attractive offshore bank for black and criminal money. Prelates and laymen use accounts for political donations, corruption, money laundering and embezzlement. At the beginning of the 21st century, Western banks, which have to comply with the rules to combat money laundering and terrorist financing, no longer accept unexplained money from the IOR.

Under this pressure, Pope Benedict XVI introduces the Autorità di Informazione Finanaziaria (AIF), which will start in 2011 on the basis of the first Vatican anti-money laundering legislation. The AIF* supervises the IOR and the monitoring system for financial transactions in the Vatican City. The first AIF president is a cardinal.

Benedict asks Moneyval in 2011 to review the system of the Holy See and Vatican City. Moneyval is the committee of the Council of Europe that evaluates measures against money laundering and terrorist financing. Among other things, the committee recommends that the AIF be reorganized.

In August 2013 Benedict’s successor Pope Francis adopts the Moneyval recommendations in his Motu Proprio. “The AIF reports directly to the Pope. We have two functions. One as financial intelligence unit (FIU) with all the powers that a FIU has. Second, we are the financial supervisor and regulator and we therefore keep prudential and conduct supervision on the IOR,” says René Brülhart.

The former lawyer was head of the FIU-Liechtenstein for eight years and was the vice-president of the worldwide organisation of FIU’s. Brülhart starts 2013 as director of the AIF. In 2014, Pope Francis appoints Brülhart, who because of his looks and tailor-made suits, sometimes is being termed ‘the James Bond of the financial world’. In our view, this equation lacks both the flamboyant Bond and the cautious Brülhart.

What powers do you have as a supervisor?

René Brülhart: “All powers a supervisor and regulator should have according to the international standards. If necessary, we can carry out inspections at the IOR on the spot.”

“If needed, yes. But normally we announce our visits. It is important that we are predictable and transparent.”

Is only the IOR under supervision or also the APSA, the administration of the Holy See, where – according to some news media – in 2014 still money would be laundered on a large scale?

“This is an incorrect allegation. APSA also fell under our AIF supervision until the end of 2015. But since 2016, supervision only includes institutions that carry out financial activities on a professional basis. And the IOR is the only one that does that. APSA and other agencies are covered by the obligation to report suspicious transactions countering money laundering and terrorist financing. We process reports, make an in depth analysis and share information about suspicious transactions with other FIUs in for example the Netherlands and Luxemburg, and with local authorities in the Vatican City, such as the Gendarmerie. If there are reasonable grounds to suspect an activitity of maney laundering based on the analysis carried out, we disseminate the report to the Promotor of Justice, the Attorney General of the Vatican. “

You studied in Nijmegen for a while. According to Dutch standards, the AIF combines the functions of the DNB, AFM and FIU; except that the AIF can not impose fines. Is that combination desirable? (DNB = the Dutch central bank, AFM = Authority for the Financial Markets)

“The AIF is tailor-made for the Vatican. Unlike Liechtenstein, Vatican City is not a financial center, because outside the IOR there are no professional financial service providers. The IOR is also not a real bank, because for example it does not provide loans. The IOR manages assets of its clients. Furthermore, it provides payment services for the Holy See and affiliated entities, for religious orders and other Catholic institutions, for clergy and employees of the Holy See and for accredited organizations. You are not allowed to open an account.”

Is the AIF over its peak?

“The decline is logical. We have worked hard in the first years to set up the system and that resulted in many reports. Now it stabilizes and we go back to normal. The number of notifications is decreasing, but their quality is increasing.”

In the last evaluation in 2017, Moneyval said that the reporting system is functioning and both the AIF and the judicial authorities cooperate internationally. Criticism is that no money laundering case has yet been brought before the criminal judge and no assets have yet been confiscated, while in 2014, 2015 and 2016 millions were frozen each year.

How is that possible?

“The system is relatively young. It is a process in which we build a sustainable system step by step. For the public prosecutor, prosecuting this kind of cases is something new. In 2018 the Tribunal dealt with the first money laundering case and I expect the ruling this year.”

The manager and conductor of the famous Choir of the Sistine Chapel, a layman and a priest, are suspected of embezzlement, fraud and money laundering. Is this the case that is been tried?

“I can not say anything about that.”

In the AIF annual report 2017 four items (see box) are described, ultra short. Can you explain the matters?

(Kindly, but decided) “I am the non-executive president of the board and not involved in the execution.”

“What do you mean by clean? We have implemented a transparent system, our procedures and measures can be checked and we are accountable. Important is that we have the instruments in place to combat any potential illicit financial activity.”

Do you have to be Roman Catholic in order to do this work?

*) We use the abbreviation AIF, because the authority does the same in its English-language publications (if only to prevent jokes like maFIA).